The Nishimura House in Kyoto 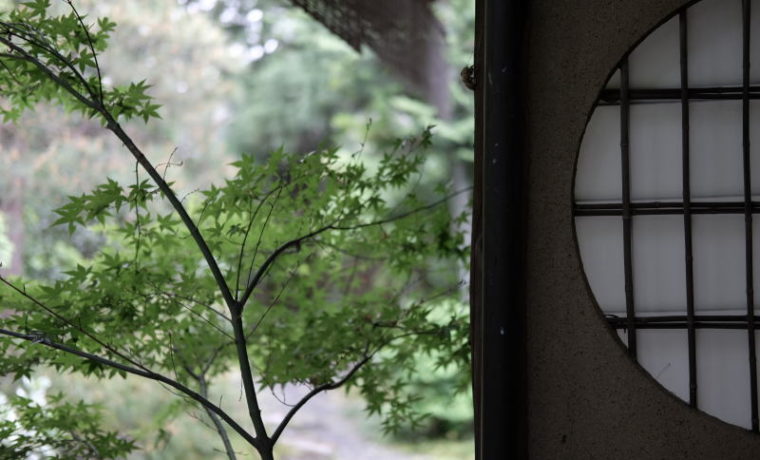 Shake (pronounced as shark-ei) is a residence of a Shinto priest who serves in a Shinto shrine. There is a district near Kamigamo Shrine where a number of shake are located, which is called shake-machi (shake town).

The Nishimura House is the only shake in this district which is open to the public. Its main attraction is the Japanese garden, which is thought to have been constructed in 1181 by a Shinto priest serving at Kamigamo Shrine at that time.

Some of the characteristics which were often seen in the aristocratic mansions of the Heian Period (794 to 1185) can also be seen here: especially the brook that meanders through the garden. The source of the brook’s water is the stream outside, and after circulating around the garden, it again rejoins its source.

Here it should be noted that we are talking about the era that preceded the introduction of Zen Buddhism and the advent of the “dry landscape garden”. It is said the brook was used for a Kyokusui-no-En, a tanka-writing party beside a brook. In this game the participants had to make up tanka poems before the cup of sake floating along the water reached them.

Since the Nishimura House is basically a private property, it is different in some ways from typical tourist spots. if you get there, the first thing you have to do is to push an intercom button at the gate to inform the residents of your arrival. Entering into the entrance hall, you will hear a man’s voice say “Douzo.”

So you take off your shoes and step up on the floor. After a while, a man clad in dark attire suddenly appears from nowhere. You pay him 500 yen as an admission fee, and he will say, “Douzo goranni natte kudasai” (“please look around”).

Then you can appreciate the tokonoma alcove and a scroll hanging there in the main building. It is also good to sit down on the floor to view the garden. In a corner of the garden, you may notice a pit that has a stone wall. That is where people performed mizugori, which is a cold-water ablution. It is a kind of practice to purify oneself by pouring cold water upon one’s naked body.

The Nishimura House is a very quiet place lying in a quaint, very typical Kyoto district. So if you are a little fed up with places crowded with tourists, the Nishimura House might become one of the candidates for your future Kyoto trip.

The Nishimura House is about a 5 minute drive from Kitayama Station on the Karasuma Line, Kyoto City Subway. You can use a bus or a taxi. But please note that, as of 2016, it is only open from March 15 to December 8.

If you want to visit other places nearby, some interesting spots are within walking distance of the Nishimura House. Kamigamo Shrine is one of the oldest and most important shrine in Kyoto. It was designated as a UNESCO World Heritage site in 1994. The shrine’s compound is large, and it includes the woods, a stream and many historically important buildings.

Strolling through the Shake Machi is in itself one of the highlights of a trip. Among all the shake-machi in Japan, this one in Kamigamo is particularly distinctive in that it has maintained well the historical atmosphere and characteristics of the old days. For this reason, this area was designated by the nation as an “Important Preservation District for Groups of Historic Buildings.”

Ota Shrine is one of the auxiliary shrines of Kamigamo Shrine. Probably for most people, it is recognized as a place where one can see the beautiful water iris flowers which bloom in May.

The Nishimura House is a very quiet place lying in a quaint, very typical Kyoto district. So, if you are a little fed up with places crowded with tourists, the Nishimura House might become one of the candidates for your future Kyoto trip. For a guided tour in and around the Nishimura House, please send an e-mail from Rates/Contact page of this site.

Photographs: taken at the Nishimura House, by Koji Ikuma,
with Fuji X-T1 equipped with an XF35mm F2 R WR lens.