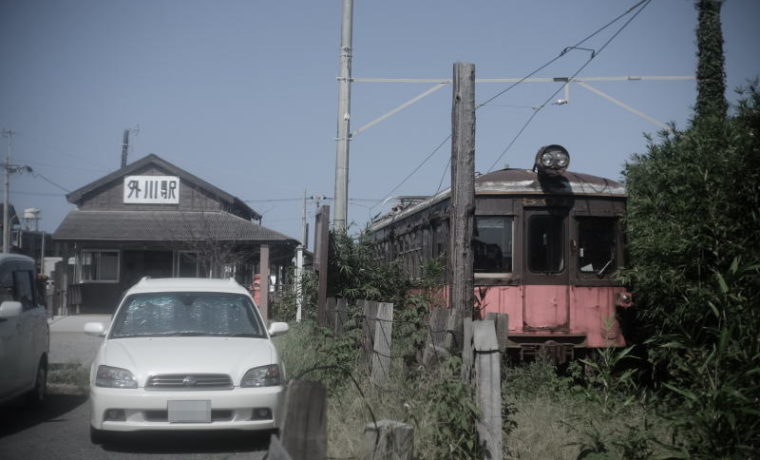 The Choshi Electric Railway (Choshi Dentetsu) is a small local railway line which runs through Choshi City, Chiba Prefecture in the Kanto Region. It has been operating for nearly one hundred years. It is sometimes called the “backbone of Choshi tourism,” for it offers you the chance to visit the towns along its line where interesting activities await you, including strolling through the small fishing village of Tokawa, for example.

Tokawa is the last stop along the CER, and it takes about 20 minutes from Choshi, the starting point. The wooden building of Tokawa Station is an original structure constructed in 1923, although it has undergone several repairs (See the top image on this page). The building has such an old, quaint air that it could be an interesting photo spot for some people, as could the old, abandoned CER passenger car beside it (See Update 1 at the end of this post). If you walk from the station to the south, descending a gentle slope, this quiet fishing town is before your eyes.

The town of Tokawa was created in 1661 under the leadership of a man named Sakiyama Jiroemon, who constructed the Tokawa harbor at the same time. Jiroemon came up to the Choshi area in 1656 from his native Kii Province at the time, which largely overlaps today’s Wakayama Prefecture. After making his mark by introducing a new sardine-fishing method called makaseami, which had been alien to local villagers at that time, he moved to the Tokawa area and started constructing the port and town there.

When the construction was finished in 1661, the town was laid out in an orderly grid pattern, and the port was so formidable that it would continue to be used in its original form until the mid-20th century. Then, he immediately summoned people from Kii Province, and, over time, the town developed into a community with over one thousand households. Walking down the streets of Tokawa today, you will notice that the grid pattern still remains.

If you visit the Tokawa ‘Mini’ Folk Museum located near Tokawa Station, you can learn a lot more about the past and present of Tokawa Town. It exhibits valuable items, including age-old fishing tools, historical residential records and photographs, and shells and fossils collected at the nearby coast and cliffs. The last time I visited there, the curator enthusiastically told me about the founding and history of Tokawa Town.

I asked her if, in the 17th century, Jiroemon had really constructed the town from scratch.
“Yes, this land used to be unused. It was owned by a farmer living in a nearby village. His descendants are still living there, growing cabbage. Anyway, he was not able to do farming here. With large bedrocks in the earth, the land was not suitable for farming. But on the other hand, there was plenty of water. That is what it was like when Jiroemon arrived.

“Did Jiroemon and his people purchase the land from the farmer, or just rent it?”
“It was basically on loan, with a few exceptions, like one of my own ancestors, who actually bought some of the land. Anyway, Jiroemon knew they could get a lot of sardines from the ocean. So, after catching sardines, they would boil them, take out some oil and scum, and would make a kind of fertilizer out of them. The farmer received it from them as a land fee and used it for his farming. So most of our ancestors didn’t pay any rental fee to the farmer.”

After spending some time around the Tokawa harbor, you can take a 20-minute or so walk along the coast, to the southeast, which takes you to Nagasakibana, which is a small headland stretching out into the Pacific Ocean (there are other Nagasakibana in other prefectures, but this one is in Chiba Prefecture). It is a rather desolate area, where a 21-meter chimney-like tower (technically, this is not a lighthouse) stands forlornly among rocks.

You seldom see sightseers around here. At the tip of the headland, you are surrounded by the rolling sea on three sides and may be overcome by a feeling that you might be the only person left on a deserted island. This place is known among anglers as a fine rock-fishing spot.

Stepping into the inland, exploring the small town of Nagasakibana could also be an interesting experience. Compared with the town of Tokawa, where you can occasionally find a few tourists, it seems to me that Nagasakibana Town is more quiet. On the surface, this town is an ordinary small town you can find anywhere in Japan, or maybe it actually is.

Both Tokawa and Nagasakibana could be interesting locations to visit. They might not be overly exciting as sightseeing spots, but they could make you feel relaxed in the quiet atmosphere, away from the hustle and bustle of large cities.

To go to Tokawa Town, take the Sobu Line from Tokyo Station toward the east, and you will reach the JR Choshi Station in about two hours. Then, buy a ticket of the Choshi Electric Railway bound for Tokawa.

If you want to visit other places in Choshi City, there are some interesting places. Cape Inubo, or Inubo-saki, must be the highlight of the CER trip. The cape is a scenic spot surrounded by the beautiful coast and cliffs. It is also home to the Inubosaki Lighthouse, which is designated as one of the “Best 100 Lighthouses in the World.” There are an observation deck and an exhibition room inside the lighthouse. Byobugaura is a range of coastal cliffs at the height of 20 to 60m, stretching about 10km. It is sometimes called the “Dover of the East” as it looks like the White Cliffs of Dover in England. This place has been designated as a National Scenic Spot as well as a Natural Monument since 2016. Riding the long-standing Choshi Electric Railway Line is, in itself, an interesting experience. It stops at every station, and you can enjoy rural, rustic scenery from the window.

If you want to enjoy these places fully, I recommend you to get a tour guide who is familiar with these areas, because otherwise, it might be a little difficult for you to find some interesting signs from the old days buried under the guise of new modern-style housings. For a guided tour along the Choshi Electric Railway Line or other places in Choshi City, please send an e-mail from the Rates/Contact page of this site.

Photographs: taken at the Tokawa fishing village, the Nagasakibana coast, and other places along the Choshi Electric Railway Line,
by Koji Ikuma, with Fujifilm X-T1 and a Xenon 25mm f1.4 lens.

Update 1 (in March 2021): The abandoned CER passenger car is still exhibited at Tokawa Station, but they recoated the exterior of it a couple of years ago. Hiring people from a big painting company from Chiba City, a total repainting was conducted. So, now it looks a little “new” compared to the one captured in the photographs on this page in 2017.