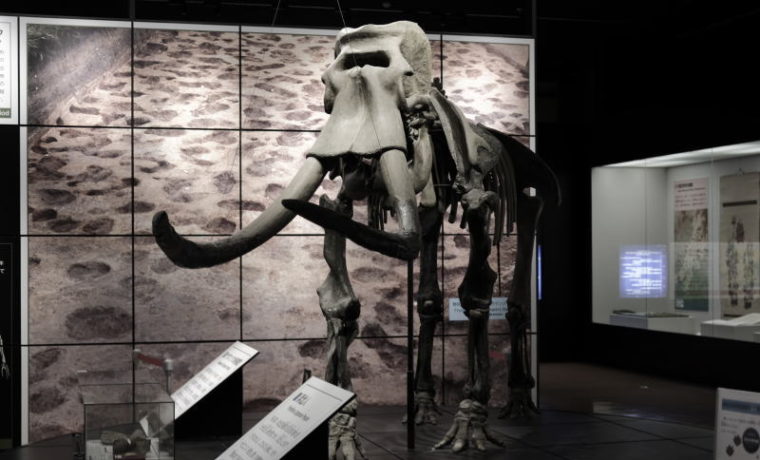 Today, people generally believe that first humans arrived and settled on the Japanese archipelago during the period roughly stretching from 38,000 BCE to 33,000 BCE.

The earliest presence of human beings on the Japanese archipelago should mark the beginning of the Paleolithic Period in Japan. But determining the exact start date of this is very difficult. This is mainly because Japanese soil consists largely of highly-acidic volcanic ash. The ash has, over tens of thousands of years, melted the organic materials it contained, like human bones, clothes, animal hides, and wooden tools. So, in Japan it is generally difficult to find anything organic from the geological strata older than 15,000 BCE unless certain conditions in the soil exist.

One of the exceptions is the Tomizawa Ruins in Miyagi Prefecture (in the Tohoku Region). In this site, researchers discovered a number of fossilized tree roots and trunks, besides some signs of human and animal activities, from a layer of around 20,000 years ago.

But basically, at present, almost all we know about how the earliest Japanese lived back in those days comes from chipped stone tools. Stone tools are inorganic materials. So, they can be unearthed in their nearly original states even from Paleolithic rock layers from more than 30,000 years ago.

Today, people generally believe that first humans arrived and settled on the Japanese archipelago during the period roughly stretching from 38,000 BCE to 33,000 BCE. This is because the oldest stone tools in Japan, according to most archaeologists, have been discovered in layers from around that period throughout the country. And this theory doesn’t contradict greatly with the widely accepted belief about the long journey of our direct ancestors. Homo sapiens first appeared somewhere in Africa around 200,000 years ago (give or take a few thousands). And some of them left their native continent and settled in other parts of the world around 100,000 to 70,000 years ago. Eventually they reached Eastern Asia around 40,000 to 35,000 years ago.

Studies suggest that, in those days, the temperature of the earth was colder than it is now. And there were a lot of glaciers on the earth’s surface. This in turn means the level of the sea water was lower by the total amount of those glaciers. Under these conditions, the Japanese archipelago broke off and reconnected with the Eurasian Continent several times. This seems obvious from the fossils of extinct mammals found across the country.

Researchers have discovered a number of fossil molars of mammoth in various places in Hokkaido. Also, people have unearthed fossil fragments of Naumann’s elephant (See the top photo on this page) and Giant Yabe elk in great number from the sites near Lake Nojiri in Nagano Prefecture (in the Chubu Region). These massive animals originated on the continent. That is why researchers more or less agree that the first inhabitants in Japan were the people who came following them to the Far Eastern archipelago.

About the lives of the Paleolithic people in Japan, we know very little. But many think they were basically hunters who moved constantly throughout the land to track animals. They seem to have lived in a simple tent-like house made of animal hides. It is certain that they used chipped stone tools. And the mounds of small stones, where they likely butchered animals and steamed the meat, have also been discovered. But they didn’t yet have any technique for making earthen vessels, not to mention metal vessels. So, researchers think that probably those earliest inhabitants couldn’t boil their foods or eat any kind of soup.

The earliest stone tools discovered in Japan are very primitive types of chipped stone tools. And they include a particular type where only one side of a stone is sharply polished. It is sometimes cited as one of the earliest polished tools in the world. Throughout the Paleolithic Period in Japan, stone-tool making techniques advanced and regional differences in forms gradually began to emerge. It is not clear exactly what kind of purpose people used each of these tools for. But probably, some tools were used for skinning, others for felling or digging, while some were attached to the tip of a wooden shaft and used as a spearhead. Today, researchers are busy sorting, categorizing, and naming these primitive tools. These tools vary in their shape and size, time period they were used, and the area they were excavated from.

Among the variety of these Paleolithic stone tools, one particular type seems to be worth a special mention here. That is saisekijin (細石刃). The English counterpart is ‘microlith’. But it seems the scope of this English term is much broader than the Japanese term. Saisekijin is thin and tiny tool with a sharp cutting edge. Researchers assume that people sometimes used several of them at a time by inserting them on both sides of a wooden stick (or animal bone stick) in order to hunt animals. (A Japanese high school teacher in Saitama Prefecture once reproduced the whole process of making this particular hunting tool. I thought it was an impressive work and he was gracious enough to permit me to put the photographs of his work on this website, as shown below.)

Studies suggest that saisekijin and its usage originated in Siberia and was introduced to Hokkaido, through the land bridge which existed at that time, some 23,000 years ago. And it eventually reached Japan’s main island, seemingly forming a ‘saisekijin culture’ all through the land during the end of the Paleolithic Period.

Mainly because of the aforementioned acidic soil attributed to ancient volcanic activities, fossils of human bones have been rarely excavated from the Paleolithic layers of Japan. So far, people think that a set of bone fossils unearthed in 1962 at a limestone quarry (present-day Negata Site) in the Hamakita area of Hamamatsu City, Shizuoka Prefecture, is the only ‘authentic’ Paleolithic human bones found on Japan’s main island. People commonly call these particular bones the ‘Hamakita human bones’. When analyzed by the latest “carbon-14 dating method” in 2002, it turned out that a part of those bones were 18,000 years old. However, since these bones are only fragments, some argue that they are not a big enough sample size to grasp its overall image.

On the other hand, they have discovered a considerable number of well-preserved Paleolithic human remains from the various places on the southern islands in Okinawa Prefecture (in the Kyushu Region). These places include the Minatogawa limestone quarry and the Yamashita limestone cave. In particular, there is a site which has attracted attention from many researchers in recent years. That is the Shiraho Saonetabaru Cave Ruins on Ishigaki Island. The island lies just about 300 km off the coast of Taiwan. In 2008, during the construction of the new Ishigaki Airport, workers unearthed several fragments of human bones there. And the carbon-14 dating result indicated that one of the bones dates back to some 20,000 years ago.

Subsequently, the Okinawa Prefectural Archaeological Center conducted several large-scale excavations at the Shiraho Saonetabaru site between 2012 and 2016. It was when they discovered many human bones from at least nineteen different people. These bones included one nearly complete skeleton of a male human (the ‘Skeleton No. 4’). Later, it turned out that this particular skeleton was 27,000 years old. Now, studies of various aspects of these findings in Okinawa are continuing. And people are hoping that some insights will be learned about the history of the Paleolithic people on the southern island chain and how they were related to the ancestors of the mainland Japanese.

There are some scholars who say that the Paleolithic Period in Japan dates back much farther than 40,000 years ago. In fact, at the Kanadori archeological site in Iwate Prefecture, a group of stone tools has been excavated from the strata which are thought to be 80,000 to 90,000 years old. Also, the researchers in the Sunabara Remains in Shimane Prefecture (in the Chugoku Region) have been claiming that the flake stones and chipped stones they found there date back 110,000 to 120,000 years ago and are thus the oldest stone tools in Japan.

However, for both of these sites, full consensus has not yet been reached in the Japanese academic world on their findings. Perhaps, this has something to do with a fact that it is sometimes very difficult to determine whether certain ‘chippings’ on a stone, for example, are artificial or natural. Even specialists sometimes disagree over this kind of issue. Also, critics have sometimes pointed out errors in determining an exact age of a certain stratum.

I suppose another reason would be that there are still some people who are overly cautious because they have not yet been able to forget the dark memory of an incident which occurred in November 2000. It is known as the ‘Japanese Paleolithic Hoax’. In the incident, the perpetrator eventually admitted he intentionally staged the fake discovery of many Paleolithic stone tools that he claimed were 40,000 to 200,000 years old. And later, several sites he had worked at had their government designation as special sites removed.

Top photo: Skeleton model of Naumann’s Elephant
in the Hamamatsu City History Museum.
Photographs in this page: unless otherwise noted,
taken at the Hamamatsu City Museum,
on May 28 and June 26, 2020, by Koji Ikuma,
with Fujifilm X-T1 and XF 35mmF2 R WR.