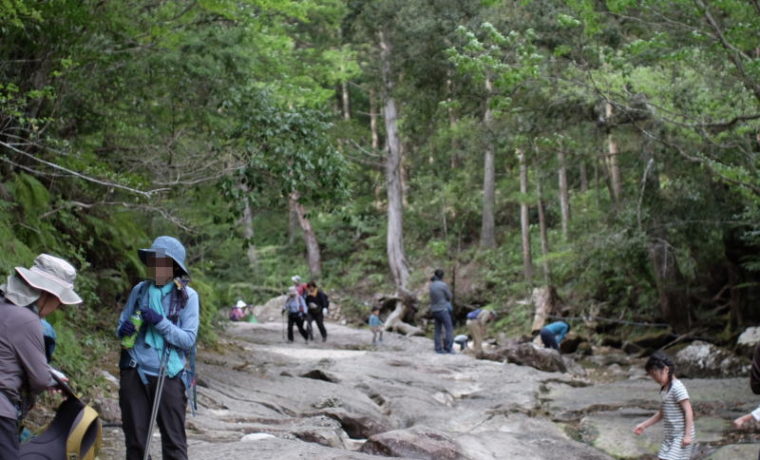 Chiiwa-kyo is located in Shinshiro City, Aichi Prefecture (in the Chubu Region). It is a range of gorges spanning four kilometers in the upper reaches of the Chiiwa River, a tributary of the Ure River. Situated in the Tenryu-Okumikawa Quasi-National Park, this area has many steep and rocky hills and mountains. So therefore, it is popular as a mecca of free climbing. (But you need to be careful not to disturb your surroundings because these rocky mountains are protected by law). You can see Japan’s natural beauty here.

The highlight of Chiiwa-kyo is the 670m. Mt. Chiiwa, which has a lot of caves, large and small, but sometimes we need to climb almost vertically to reach some of them.

By the way, the kanji character representing a woman’s breast is used for ‘chi’ of Chiiwa-kyo. This is because a breast-like lump of stalactite is hanging from the ceiling of the largest cave on Mt. Chiiwa. Legend has it that a starved child of a traveler survived by drinking the dew dripping from the breast-like rock.

I visited there on a sunny day in May 2016 with my friend. After visiting several places in Horai Town, we got to Chiiwa-kyo in the afternoon. We parked the car in the narrowest parking space I’ve ever seen and started walking.

The ground we walked on didn’t consist of normal soil but of bedrock. It was a large river-bed, seemingly made up of one piece of flat smooth bedrock. There was a stream in which very clear water flowed, forming interesting features like small waterfalls and rapids everywhere.

After walking in the woods for fifteen minutes, we arrived at the foot of the cliff, which stood dauntingly in front of us. My friend wanted to climb, but unfortunately I was already exhausted by then from walking all day long.

Furthermore, the majestic presence of the cliff was enough to discourage me, and I didn’t want to die. I said to him, “I can’t go.” So he told me to wait there. The place where I was waiting was tranquil, being surrounded by lush dense woods.

However, my friend returned 30 minutes later, saying “that was too high.” After all that, we could not conquer the cliff that day. Nevertheless, I was, in a way, satisfied because I could relax in the rich natural environment with its almost therapeutic-like healing qualities.

Several days later, I talked with a local woman living in Shinshiro City. She said to me that climbing the cliff was actually not that hard if I put my mind to it. So maybe I was just overwhelmed by the look of it. Anyway, we certainly enjoyed that day and we came back to downtown Hamamatsu to satisfy our hunger with cold beer and yakitori.

We have had a very severe journey from Toyoka. That day the rain was ceaseless, and in the driving mists one could see little but low hills looming on the horizon.

There are a couple of interesting places near Chiiwa-kyo. They are just a short drive from the gorge. Ure Dam was constructed in Horai Town (present-day Shinshiro City) in 1958. It was built of concrete, and the lake created by damming up the water is called Lake Horai. Nagashino Castle Ruins Museum is also one of the major tourist attractions in the region. This museum stands at the site of Nagashino Castle and exhibits many items concerning the crucial Battle of Nagashino in 1575.

Chiiwa-kyo in Horai Town is the place not only for avid rock climbers or nature lovers, but also for people who are looking for a place to refresh, temporarily taking a distance from everyday work. If you are interested in a guided tour in and around Chiiwa-kyo, please send an e-mail from the form on Rates/Contact page of this site.