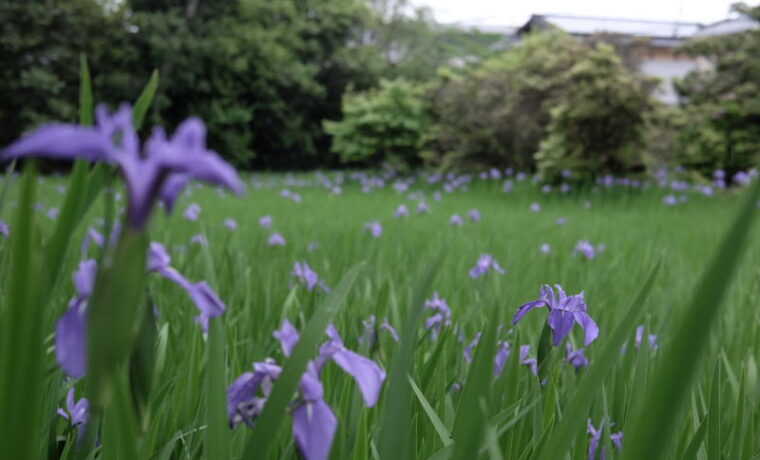 Probably for many people Ota Shrine is recognized as a place where one can see the beautiful water iris flowers which bloom in May.

In this write-up, I would like to talk about a couple of interesting spots (‘hidden gems’ I would say) in the Kamigamo district in Kyoto (which is in the Kinki Region). At first, let me say a few things about shake (社家). Pronounced as shark-ei, the Japanese term shake refers to a distinguished clan that had served to a Shinto shrine over generations. With the fall of the Edo samurai government in 1867, the shake system per se was abolished. But some of the traditional shake houses still persist in some parts of Japan and many of them still have close relationships with their local Shinto shrines.

There are a couple of districts throughout Japan where a number of these old shake are gathered. These areas are called shake-machi (社家町, or a shake town). Among a number of shake-machi that remain in Japan, the one in Kamigamo is particularly well-known because it still maintains old historical atmosphere very well. For this reason, this particular area in Kyoto was designated by the nation as an ‘Important Preservation District for Groups of Historic Buildings’.

The Nishimura House is the only shake in the Kamigamo district which is open to the public. Its main attraction is the Japanese garden, which is thought to have been constructed in 1181 by a Shinto priest serving at Kamigamo Shrine at that time.

The Brook in the Garden

Some of the characteristics which were often seen in the aristocratic mansions of the Heian Period (794 to 1185) can also be seen here: especially the brook that meanders through the garden. The source of the brook’s water is the canal outside, and after circulating around the garden, it again rejoins its source.

Here I should note that we are talking about the era that preceded the introduction of Zen Buddhism and the advent of the ‘dry landscape garden’. They say the brook was used for a Kyokusui-no-En (曲水の宴), a tanka-writing party beside a brook. In this game the participants had to make up tanka poems before the cup of sake floating along the water reached them.

Since the Nishimura House is basically a private property, it is different in some ways from typical Japanese tourist spots. if you get there, the first thing you have to do is to push an intercom button at the gate to inform the residents of your arrival. Entering into the entrance hall, you will hear a man’s voice say “Douzo.”

So you take off your shoes and step up on the floor. After a while, a man clad in dark attire suddenly appears from nowhere. You pay him 500 yen as an admission fee, and he will say, “Douzo goranni natte kudasai” (“please look around”).

Then you can appreciate the tokonoma alcove and a scroll hanging there in the main building. It is also good to sit down on the floor to view the garden. In a corner of the garden, you may notice a pit that has a stone wall. That is where people performed mizugori (水垢離), which is a cold-water ablution. It is a kind of practice to purify oneself by pouring cold water upon one’s naked body.

Also, among hidden gems in Kamigamo, Kyoto, is Ota Shrine, which is within easy walking distance from the Nishimura House. Probably for many people the shrine is recognized as a place where one can see the beautiful water iris (kakitsubata) flowers which bloom in May in the marsh adjacent to the precinct. This colony of the wild water iris is a Natural Monument of Japan. However, even without this attraction, the shrine is interesting and worth visiting for its own sake.

The he foundation of the shrine is uncertain. Yet it is surely the oldest shrine in the region, even being listed in the Engishiki jinmyocho (延喜式神名帳, a register of shrines in Japan) compiled in the 10th century.

Enshrined here is Ame no Uzume no Mikoto, who is a female deity appearing in Japanese mythology. She is arguably the first dancer in the history of Japan. She is said to have danced the sacred Shinto kagura dance in front of the other kami (gods) to entice Amaterasu to come out of Ama no Iwato (cave of heaven) because the world had turned dark.

For this reason, many people, like aspiring musicians and stage artists, visit the shrine today to pray for the improvement of their artistic skills. They say that among other blessings the shrine bestows upon visitors are longevity, safety of the family, and good matchmaking.

The last time I visited the shrine, I used a taxi instead of a bus from Kitayama Station on the Karasuma Line, Kyoto City Subway. The fare was not so high, and I could avoid all the complications and the waiting time associated with a bus trip. I asked the taxi driver if the water irises were in full bloom:

The taxi driver said, “I think they have just started to bloom, not full though. But I am a little worried about deer because they came out of the woods and ate a lot of flowers last year.”
“Do they go into the marsh, I mean, into the water?”
“No, they don’t. But they only stand outside the marsh and crane their necks. They only eat flowers growing on the periphery of the marsh.”
On entering the shrine precinct, I met an old woman peddling rice cakes. She also mentioned last year’s damage inflicted on the water irises by deer.

I paid 300 yen and entered into the kakitsubata marsh. During blooming season only, admission is required as a ‘preservation fund’. Though the flowers were still half in bloom, the beautiful purple color spread on the surface of the marsh, and I could fully enjoy it.

They have grown here for more than a millennium, and Fujiwara-no-Shunzei, a poet in the Heian period, actually composed a waka poem about them. It goes like this: “Kouyama (Kamoyama) ya / Ota no sawa no kakitsubata / fukaki tanomi ha / iro ni miyu ramu…..”

Getting there (English Map)

Both the Nishimura House and Ota Shrine is about a-few-minute drive from Kitayama Station on the Karasuma Line, Kyoto City Subway. You can use a bus or a taxi. But please note that, as of 2016, the Nishimura House is only open from March 15 to December 8.

Kamigamo Shrine is one of the oldest and most important shrine in Kyoto. We can’t call this Shinto shrine “one of the hidden gems in Kyoto,” because it is very famous. It became a UNESCO World Heritage site in 1994. And the Aoi Matsuri Festival, one of the three major festivals in Kyoto, is actually the festival of this shrine. The shrine’s compound is large, and it includes the woods, a stream and several historically important buildings.

Both the Nishimura House and Ota Shrine are quiet places lying in a quaint, very typical Kyoto district. So, if you are a little fed up with places crowded with tourists, these places might become the candidates for your future Kyoto trip. For a guided tour in and around the Kamigamo area in Kyoto, please send an e-mail from Rates/Contact page of this site.

Photographs: taken in the Kamigamo district in Kyoto,
by Koji Ikuma, with a Fuji X-T1 equipped with
an XF35mm F2 R WR lens.