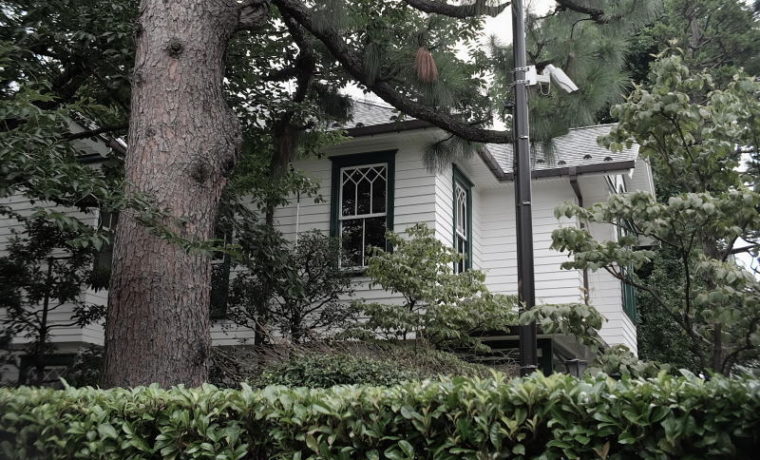 The "old missionary house" used to be a residence of an American missionary, J. M. McCaleb.

The Toden Arakawa Line is the only streetcar line in Tokyo (which is in the Kanto Region). It is running 12 km from Waseda to Minowa. If you board it, you will notice how essential it is as a means of transportation for local people. Along this railway line are several interesting places. Those places may be not very famous as sightseeing spots but they have their own unique charms. In this post, I would like to introduce some of them.

In a quiet neighborhood near Zoshigaya Cemetery in Toshima Ward stands a conspicuous Western-style structure made of wood. It used to be a residence of an American missionary, J. M. McCaleb. But after his return to the US, it eventually became the property of Toshima Ward. And since 1989, it has been open to the public as ‘the Old Missionary Museum of Zoshigaya’. This is a beautiful, interesting structure and here you can learn about the history of Christianity in Japan.

Born near Nashville, Tennessee, in 1861, John Moody McCaleb came to Japan with his wife in 1892. And after living in the foreigner’s settlement in Tsukiji for 15 years, he built the Missionary House in Zoshigaya in 1907. It was his home as well as a base to engage in missionary work based on Puritanism.

The neighborhood was a new residential area at that time, and there he also started a kindergarten and a Sunday school. The older generation of this area still remembers how his activities, ranging from charitable work to educational programs for children and young men, impacted the local people.

Conversation with the Manager

When I visited there with my friend in July 2016, we were fortunate to speak briefly with the manager of the museum’s office. I asked him if international travelers sometimes visited there.
“Ah, sometimes…,” he said, as his voice trailed off. “But Mr. McCaleb’s relatives occasionally visit here. If I remember right, he had three children. So probably those people we met the other day were his nephews or something. They duly visit here every time they come to Japan.”
“So, didn’t Mr. McCaleb live in Japan permanently?” I asked.
“No. He returned to America shortly before the Pacific War broke out.”

“Do you know what caused him to go back to his home country?”
“Well, I think there were various reasons, but it might have been partly related to the progress of his missionary work…”, he said hesitantly. (Perhaps, McCaleb’s efforts to spread Christianity were largely unsuccessful.)
I asked him how the house was built.
“Two Japanese carpenters built it. Their names are still on record. But I suppose McCaleb gave them detailed instructions so that they could build this Tennessee-style structure.

We strolled around the garden, appreciating the beautiful plants and trees (some of them were planted by Mr. McCaleb himself). And then we went into the house. We were especially intrigued by a unique bay window (called an “oriel”) facing west and the fire-place mantel with art nouveau tiles and decorations made from zelkova wood in the living room.

Back at my home in Shizuoka Prefecture, I did some further study about this missionary house, and learned how difficult the times Mr. McCaleb lived in were for Christian missionaries in Japan. It was the period from the middle Meiji Era leading up to the outbreak of the Pacific War.

Even though the ban on Christianity had already been lifted by that time, nationalism was beginning to rear its ugly head and it sometimes led to the expulsion of foreigners and foreign cultures. In this environment, it seems Christian missionaries gradually found themselves in an awkward position. The thirty-four years he spent in Zoshigaya overlaps with this ‘period of hardships’ for Christianity.

Mr. McCaleb left Japan in 1941, and he never came back again. Reportedly he didn’t even put up an American flag, to say nothing of a Japanese one, in front of his house in Zoshigaya. And he was quoted as saying, “My true nationality is the kingdom of heaven.”

Another unfamiliar spot in Zoshigaya, Tokyo, I’d like to introduce here is just several minutes walk from the missionary house. The Kishimojin-do (The Kishimojin Hall) in Zoshigaya is a detached sub-temple of Homyo-ji Nichiren-sect Temple. It might be a place any mother in the world would want to visit. Its principle image is Kishimojin, whose Sanskrit name is Hariti. She has been an object of worship especially as a goddess of pregnancy, safe delivery and happy child rearing.

In Indian mythology, she used to be a demon who abducted and murdered many children, but, chastised by the Buddha, she reformed herself and vowed to protect all children.

The main building of Kishimojin-do was constructed in 1664 using funds donated by the lawful wife of the Lord of the Hiroshima Domain. And that is why some characteristics of the architectural style in Aki region (the old name of Hiroshima) can be seen in the main building. The building, with some beautiful carvings, is in itself a valuable one which survived the bombardments during the Second World War.

As I walked with my friend along the path lined with keyaki (zelkova) trees, some of which are 400 years old, toward the main building on a hot summar day, we visited a small tourist information center, where we met an amiable woman at the counter.

And after a little while, she said cheerfully and proudly, “Anyway I hope you will enjoy the Kishimojin-do. It will soon become an Important Cultural Property of Japan!” (See Update 1 at the end of this post.)

A little later in the precinct of the temple, an elderly shop clerk of a mom and pop candy store also told us about the honorable title about to be given by the nation. And it seemed to me that both of their remarks, along with their uplifting tones, represent the general feeling of the neighborhood residents toward the Kishimojin-do.

Loved by the Locals

There is also a small Inari shrine in the compound. Enshrined there is the deity called Ukanomitama no mikoto, who has been worshipped in this region long before the Kishimojin-do was established there.
When we visited the Kishimojin-do, they were making preparations for a Bon festival dance that would be held that night.

The Kishimojin-do is a place loved by the locals. This area still retains some aspects of the ‘good old days’, when people were friendly and kind, and spoke noisily. So, if you are a bit overwhelmed by the skyscrapers in the Tokyo Metropolitan area, I hope you will relax for a while in a place like this.

If you want to visit another unfamiliar spots in Zoshigaya, Tokyo, the Zoshigaya Cemetery is within walking distance of the Old Missionary House and the Kishimojin-do. It was founded in 1874 and has the area of 10 hectares. There are the graves of many distinguished people, including Natsume Soseki, Nagai Kafu, Izumi Kyoka, Nakahama Manjiro and Lafcadio Hearn. A map of the compound showing the locations of each grave is available at the cemetery’s office.

■There is sound. Please be sure to wear your headphone.

I first knew about this song through the version by an Irish singer named Pauline Scanlon. I still believe that hers is the best version of this song. “Mourn not for them, for their trials are o’er (over) / Why weep for those who will weep no more?” is one of the most moving lines I ever heard.

Other than the places I mentioned on this page, there are many interesting, unfamiliar spots along the Toden Arakawa Line. If you would like to join a guided tour around here, please send an e-mail from the contact form on the Rates/Contact page.

Photographs: taken at a couple of places along the Toden Arakawa Line,
by Koji Ikuma, with a Fuji X-T1 and P. Angenieux Paris 15mm f1.3.