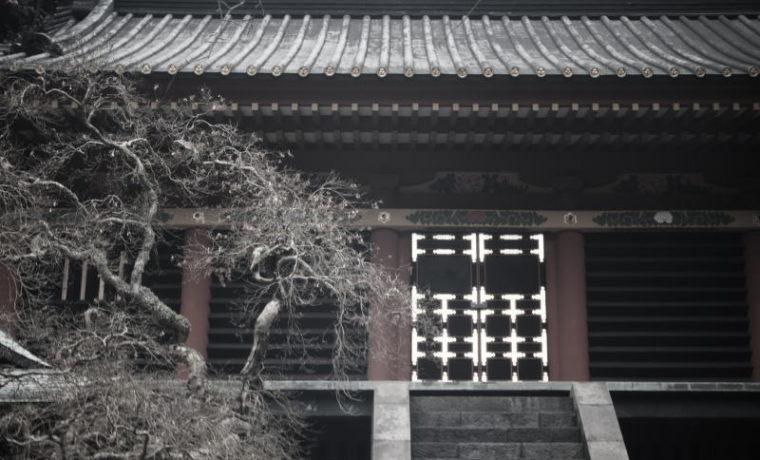 Here I would like to talk a little about Kunozan Toshogu (sometimes spelled Tosho-gu) Shrine, which is perhaps one of the most historically important shrines in Shizuoka Prefecture, which is in central Japan, on the Pacific coast side. It is located at the top of Mt. Kuno and about 8.5 km (5.3 miles) to the southwest of Shimizu Port. Since I live “relatively” close to this area, I have visited here several times privately or as a tour guide for international travelers. When you are not sure about where to visit in the middle of the Japanese Archipelago (I mean, between Osaka and Tokyo), this place is one of my recommendations.

This Shinto shrine was built in 1617, and there are thirteen structures in total in the compound. All of them are the original buildings from the early 17th century and all of them are listed as Important Cultural Properties of the nation. And the main building (sanctuary) was designated as a National Treasure in 2010. This shrine was built to enshrine the soul of Lord Tokugawa Ieyasu and to worship him as a deity.

At the entrance of the shrine precinct stands a big two-storied gate called Romon. It was constructed around 1640 by the third Shogun, Tokugawa Iemitsu, who was the grandson of Ieyasu. There is a large tablet on the gate. The kanji characters on it were autographed by non other than the emperor of Japan at that time.

The characters can be read Tosho Daigongen (東照大権現), which roughly means “Illuminator of the East”, which is the posthumous name of Ieyasu as a deity. Actually, “Toshogu shrine” means “the shrine where Tokugawa Ieyasu is enshrined”. Among many Toshogu shrines in Japan, this one is the first Toshogu and the most important one along with Nikko Toshogu in Tochigi Prefecture.

Lord Tokugawa Ieyasu is one of the most famous historical figures in Japan. He is the first Shogun of the Edo feudal government. Edo is present-day Tokyo, and Shogun was a title given by the emperor of Japan to a feudal lord.

When Ieyasu was born in 1542, Japan was in turmoil. The nation was divided into many small countries and they always fought with each other. And at first Ieyasu was just one of those feudal lords and he fought many battles himself. And finally, he won a final, decisive battle in 1600, unified Japan and opened a feudal government in Edo. And this Edo government lasted for more than 260 years. It was a peaceful period (roughly speaking). So he united Japan and brought peace to the country. That is why he is still respected by many people.

He spent his last days in Shizuoka, until he passed away in 1616 at the age of 75. And after his passing, his body was immediately carried to Mt. Kuno and buried there according to his will. One year later the shrine was built there by his son.

In Shinto tradition, it is believed that the soul of the person who contributed greatly to the country turns into kami (a Shinto deity), and becomes an object of worship. And when we visit the shrine and worship the person, we are in return given blessings of magical power by that person.

When you get to the towering Romon Gate, please pay attention to the wooden carvings above before walking through the gate. There are the carvings which depict a lion and peony flowers. The lion is considered to be the king of the animals and peony (tree peony) the king of flowers. Considering Ieyasu’s position, the lion is an appropriate symbol.

But the most interesting carvings are the ones which depict an imaginary animal called baku (pronounced as “bar-koo”). Baku has the nose of an elephant and the belly of a snake. And its main food is all the metals like iron and bronze. And that is why it is considered a symbol of peace. I mean, in the war time, all those metals are usually gathered and turned into the weapons. Then baku can’t live because of the shortage of their foods. But looking at the carving there, it seems he is healthy and well-fed, which implies the world is at peace now. The carving of baku is said to represent the most important message from Ieyasu: his wish for peace.

There are two sculptured guardians inside the gate structure. They are protecting the shrine. If you look closely at their faces, you will find the mouth of the left one (the younger one) is wide open, and the mouth of the right one (the elderly one) is tightly closed. It is said that this represents the beginning and the end of all things in this world. At the back of the gate, two sculptured guardian animals are also protecting the shrine.

After you walk through the Romon Gate, you will see a small structure called the Sacred Stable on the left. You can see a wooden carved horse inside. The horse is said to have carved in the early 17th century by a master sculptor named Hidari Jingoro.

It is said that, for a while after Ieyasu’s death, a real horse looking like the carving was living here. It was a Ieyasu’s beloved horse. The story is told that the horse came out of the stable every night to sleep beside its master’s grave (which was in the same compound). And every morning the horse returned to the stable to eat feed. But one morning a priest noticed the horse had not returned yet. So he went to the grave to look for the horse, which was already dead there as if still sleeping. And the master sculptor, listening to the story, carved the horse and dedicated it to Kunozan Toshogu.

There is another side-story about this horse. There was a man who was in charge of looking after the horse. He was a retainer of Ieyasu. Ieyasu died on April 17, 1616, and soon afterwards he committed suicide himself in seppuku style. We call it Junshi: follow one’s master to his grave. This form of suicide was sometimes seen under the feudal system in Japan.

By the way, many structures in the shrine, including the Sacred Stable, are colored vermilion. This vermilion color comes from lacquer painting. Vermilion is said to be auspicious. Lacquer is said to be resistant to heat and moisture, and is anticorrosive and insect proof. However, it is vulnerable to the ultraviolet radiation, and extreme dryness causes cracks on the surface. That is why once in 50 years, the total recoating of lacquer for all the buildings is needed. The last one was done in 2006.