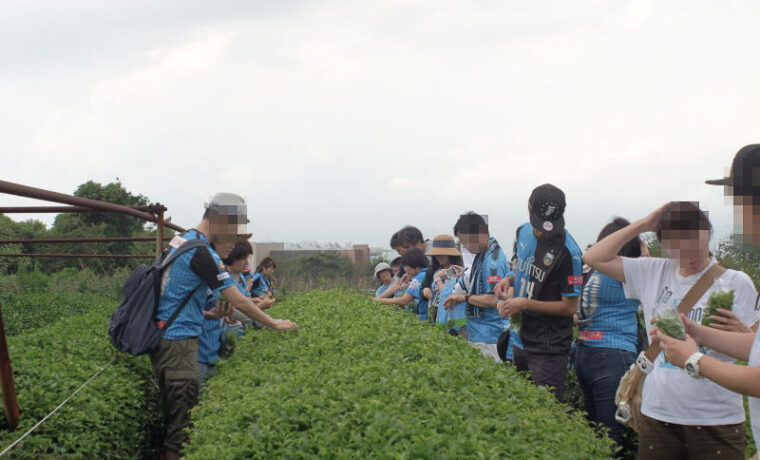 This is a very symbolic place where you can appreciate two of Shizuoka Prefecture’s iconic images, Mount Fuji and green tea fields.

On a hot and sultry day in August 2018, I had the pleasure of joining a group of people picking Japanese green tea leaves at the Nihondaira Ocha Kaikan in Shimizu (in Shizuoka Prefecture in the Chubu Region). The name of the establishment literally means ‘Nihondaira Hall of Green Tea’. (Green tea is called ocha or sencha in Japanese.) This family-run facility operates at the top of the 307-meter (1007 feet) Nihondaira hill. During the period stretching roughly from the middle of April through the end of October, they offer visitors a tea-picking (tea harvesting) experience for a fee of 500 yen in their own tea field.

That day, thirty-nine supporters of the J-League Division 1 team Kawasaki Frontale were scheduled to visit the Ocha Kaikan to enjoy tea picking. They were to come all the way from Kawasaki City, Kanagawa Prefecture, traveling a distance of about 173 km (107 mi.) by chartered bus. The main purpose of their visit is to watch the team they support take on the local professional team, Shimizu S-Pulse, at the nearby AIA Stadium Nihondaira.

The things Shizuoka is Famous for

Incidentally, this area around Nihondaira hill is located roughly at the center of Shizuoka Prefecture. And probably many Japanese associate the prefecture with any of these things: Mount Fuji, Japanese green tea, or maybe soccer (football). Mount Fuji, Japan’s highest mountain, is at the northeast edge of the prefecture (although the northern half of the mountain belongs to Yamanashi Prefecture). Speaking of green tea, Shizuoka is Japan’s No.1 prefecture both in terms of its production volume and the total land area of tea fields.

People in Shizuoka Prefecture (especially people in the Shimizu area) are also famous for their enthusiasm for soccer. Shizuoka has two professional teams in the J-League’s Division 1 (as of 2018), Shimizu S-Pulse and Jubiro Iwata. And the prefecture have sent many of its excellent players to Japan’s national team. Also, high school soccer teams representing Shizuoka Prefecture have been consistently strong in the national tournament. But, compared with a couple of decades ago, Shizuoka’s teams are not so dominant nowadays, because of the emergence of other strong teams from other prefectures.

At the Ocha Kaikan, weather permitting, you can enjoy the view of Mount Fuji over the tea field. And that has led me to think that this is a very symbolic place where you can appreciate two of Shizuoka Prefecture’s iconic images, Mount Fuji and green tea fields, simultaneously. Such places are not so large in number around this area. And for me, the day of the Kawasaki supporter’s visit might have become even more special if Mount Fuji could have been seen, because in that case I could have witnessed a very rare moment when these three symbols Shizuoka boasts of—Mount Fuji, green tea and “soccer”—were visible from one place. That was why I had been looking forward to the events of that day. If you have an ambition to absorb the essences of the region conveniently in one moment, the day like this should not be missed!

But unfortunately, when I reached the top of the hill, I realized that Mount Fuji was thickly covered with clouds. It was not raining. But it seemed that the chances of a sudden gust of wind dissipating the heavy clouds from the overcast sky were slim. Then, at around one o’clock, the 39 supporters of Kawasaki Frontale arrived. They came there after having lunch at S-Pulse Dream Plaza near Shimizu Port. At first, Mr. Takakuwa the chairman of Ocha Kaikan expressed his thanks to the supporters for coming all the way from Kawasaki City. Then he began to explain how to pick tea leaves. Each supporter was handed a plastic bag to put plucked tea leaves in, so that they can take them to home. And the tea picking has begun.

A Question from a Supporter

During the activity, one of the supporters who very much wanted to see Mt. Fuji asked me what time of the year he should visit there to see it. It was an interesting question, because that is one my clients frequently ask me during a guided tour.

Generally speaking, if you visit Shizuoka during the winter months, like December or January, the chances are very good that you can see Mt. Fuji, unless the weather is rainy. On the other hand, the mountain is often covered with clouds or mist during the summer months. As for the spring or autumn, perhaps the possibility is fifty-fifty, as long as the weather is good.

Meanwhile, in the tea field, some people had already finished tea picking. And the staff of Ocha Kaikan were now serving them new-tea-leaf tempura and cups of local green tea. (The Ocha Kaikan serves tempura for a group of 10 people or more who have paid for the tea picking experience). The taste of tempura received high praise from the supporters. And one of them was putting the leftover tempura into a bag, saying that he would eat tempura during the game.

Before leaving the Ocha Kaikan, some of the supporters bought a pack of local tea leaves or green tea-flavoured sweets from the shop. (Tea-related goods are among the best souvenirs from Shizuoka Prefecture). The supporters said they were going to visit some of the other places in the Nihondaira area before heading for the soccer stadium because the game would not start until six o’clock. So I bade them goodbye, wishing them and their team a good evening.

Lastly, now two weeks have already passed since then, when I am writing this in my home. But one big question still remains in my mind: “Which team did Mr. Takakuwa and the other staff at Ocha Kaikan root for on that evening ?”

I thought about it because, since its foundation in the 1990s, Shimizu S-Pulse has been a source of pride for this soccer-enthusiastic region. Here, soccer is greatly loved and played by children and adults alike. So, for people in this region, rooting for S-Pulse is, in a way, a natural thing. But that day in fact, it was the supporters of Kawasaki Frontale, not S-Pulse, who actually gave them their business and engaged in pleasant conversation with them. So, if I asked them that question when I visit Ocha Kaikan next time, they might hesitate to answer honestly. . .

Nihondaira Ocha Kaikan is at the top of the Nihondaira hill. It is about a 30-minute drive southeast from JR Shizuoka Station, and about a 20-minute drive southwest from Shimizu Port. The best way to get there is by taxi or car (rental cars or your own car). Unfortunately, there are few buses to take you there; there used to be a regular bus service to the top of the hill, but that route was discontinued a few years ago.

Nihondaira Ocha Kaikan is close to Kunozan Toshogu Shrine, a National Treasure Site, as well as the port of Shimizu where international cruise ships often visit. The facility is also close to Miho-no-Matsubara, a UNESCO World Heritage Site.

The Nihondaira Yume Terrace is located at the top of the Nihondaira Hill, which has a height of about 300 meters (980 feet) above sea level. Completed in 2018, this facility is just a walk of several minutes from the Ocha Kaikan. The view of Mount Fuji seen from its observation deck is wonderful.

When it comes to accommodations, the Nippondaira Hotel is just a few minute walk from Ocha Kaikan. This is the highest-class hotel with a wonderful view of Mount Fuji and Suruga Bay. Also, the 24th United Nations Conference on Disarmament Issues was held in this hotel in 2013.

If you are interested in picking green tea leaves in Japan, or if you are going to visit Shizuoka Prefecture (which is in central Japan on the Pacific coast side) from a cruise ship, please send an e-mail through the Rates/Contact page of this site.