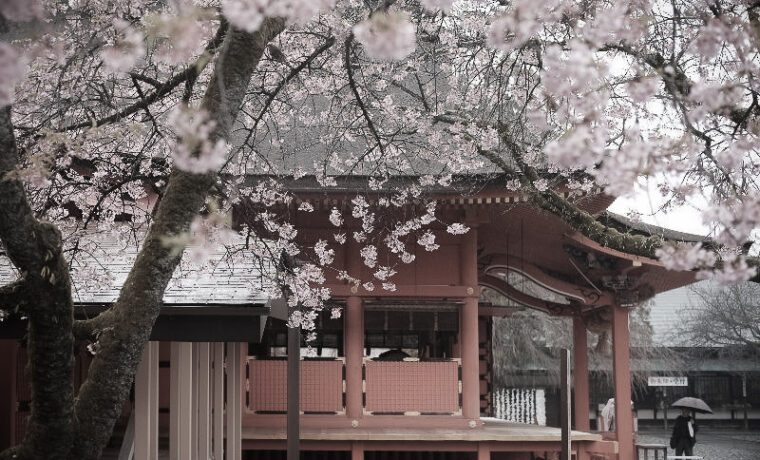 This Shinto shrine is located at the southwestern foot of Mount Fuji, Japan's highest mountain. Since long ago, people have revered the shrine as ichinomiya.

Fujisan Hongu Sengen Taisha (often called simply ‘Sengen Taisha’) is a Japanese Shinto shrine in Fujinomiya City, Shizuoka Prefecture (in the Chubu Region). It is located at the southwestern foot of Mount Fuji, Japan’s highest mountain. Since long ago, people have revered the shrine as ichinomiya (一之宮), which roughly means “the first shrine people should visit,” or “the most influential shrine in the district.”

This shrine is a beautiful place with a lot of sakura trees (Japanese cherry trees), and is also popular as one of the best Mount Fuji viewing spots in Fujinomiya City. If you are thinking about exploring the southern side of Mount Fuji, I hope you will include this spot in your Japan tour itinerary.

Many famous generals and feudal lords throughout history prayed at this shrine and offered gifts. And in 1896, the Meiji government at that time gave the shrine the rank of kanpei taisha (官幣大社), a government supported shrine of the first rank.

Also, Sengen Taisha in Fujinomiya City is the head shrine of 1,300 sengen shrines throughout Japan. Generally speaking, ‘sengen shrines’ are the ones where Mount Fuji is the main object of worship (although there are a few exceptions). The kanji characters for sengen (浅間) can also be read as asama, which is the name of the ancient kami (Shinto deity) of volcanoes. And in the Middle Ages, Mt. Fuji was the most violent and feared volcano in the nation. That is why the people built sengen shrines all around Japan and tried to appease the raging deity of Mount Fuji by worshipping the mountain.

In this way, Sengen Taisha has been closely connected with Mount Fuji since long ago. The shrine used to be called the ‘gateway to Mount Fuji’ because it was the place where people prayed and performed ablutions before ascending the mountain.

In the old days, climbing Mt. Fuji was a kind of a religious act, rather than one of leisure. These activities of the medieval climbers are well documented in a religious painting from the early 16th century called Fujisan Mandara. This painting is the nation’s Important Cultural Asset, and it is kept at this very shrine.

Shrine at the Summit

Sengen Taisha also has a branch shrine, Sengen Taisha Okumiya Shrine, at the summit of Mount Fuji. And surprisingly enough, the area above the eighth station (approximately the 3000 meter point) of the mountain is actually the part of Sengen Taisha’s precinct. Since olden times, people have considered the summit crater to be the place where kami actually reside.

Now you can see that the connection between Mt. Fuji and Sengen Taisha has been very strong. So, when Mount Fuji became a UNESCO World Heritage Site in June 2013, Sengen Taisha was also registered as one of the ‘component parts’ of the sacred mountain.

The principal deity of Fujisan Hongu Sengen Taisha is a goddess Konohana-no-sakuya-hime-no-mikoto. Her name can roughly mean ‘cherry blossom princess’. And that is why the cherry has been a holy tree of the shrine. Now there are as many as 500 cherry trees in the precinct.

In former days, people considered Mount Fuji itself to be a temporary manifestation of the goddess Konohana. It was because the mountain had such an elegant figure, with long symmetrical sides. And Asama, the aforementioned kami, was regarded as identical to Konohana. So, it is thought that in a spiritual sense, Asama, Konohana, and Mount Fuji are basically the same thing.

But the goddess also had her fierce side. The ancient Japanese mythology has a following story. When Ninigi-no-mikoto, who was her husband, learned about Konohana’s pregnancy, he doubted her faithfulness. So, she locked herself in a doorless hut and set fire to it, saying that the child would be born safely even in the fire if it was truly her husband’s (if it was really divine). And eventually, she delivered triplets.

People thought Konohana had powers to control not only fire but also water. And it was these magical powers of her that were considered to keep Mount Fuji from erupting. Today, when we worship at Sengen Taisha, the benefits which are believed to be bestowed upon us include: fire prevention, safety of ocean voyage, family harmony, and easy childbirth, among others. Obviously these benefits come from her special powers in the mythical story.

Walking down the 150 meter approach toward the Romon Gate (the Main Gate), you will come to the small but charming pond called Kagami-ike (Mirror Pond). People sometimes call it Spectacles Pond due to its shape.

This pond, like a mirror, reflects everything that surrounds it. On the surface of this pond, you can see the beautiful reflections of the tree branches, the stone lantern, the Main Gate, and even the summit of Mt. Fuji if you are lucky. The arched bridge across the pond was rebuilt with stone in 1915, commemorating the enthronement of Emperor Taisho.

Beside the Mirror Pond, there is a bronze statue of an archer on horseback. This is based on a story about Minamoto-no-Yoritomo, the Shogun who established Japan’s first samurai government in Kamakura in the late 12th century. When he held a large-scale hunting session at the foot of Mt. Fuji in 1193, he dedicated Yabusame to Sengen Taisha.

Yabusame is a type of traditional Japanese archery. An archer on horseback shoots three arrows successively at the targets. It was one of the military practices to promote the shooting skills of samurai warriors. But it was also a ritual to honor the shrine. And in commemoration of Yoritomo’s act, the shrine holds a Yabusame Festival in the early May every year. It is when the Sakura-no-baba, a large horse-riding ground in front of the Main Gate, is crowded with spectators.

If you walk under the Romon Gate and enter into the graveled sanctuary area of the shrine, you will notice that the main buildings are all painted vermillion, and have thatched roofs of hinoki bark (hinoki is a Japanese white cedar). Since ancient times, people believed the vermillion color had the power to drive away evil spirits. And hinoki-bark roofs are one of the most ancient forms of Japanese roof construction. In medieval Japan, they had a higher value than tiled roofs.

You may find several different symbols painted or carved on those buildings: the symbol of a chrysanthemum flower, which is the family crest of the Japanese imperial family; the symbol of the three leaves of hollyhock, which is Tokugawa’s; and the symbol of the shuro tree (a kind of palm tree) painted on the offertory box, which comes from the Fuji clan whose members had served as the high priests of Sengen Taisha for over a thousand years.

The shrine tradition tells about the origin of Sengen Taisha. The 11th Emperor, Suinin, built a shrine at the slopes of Mt. Fuji in the year of 27 B.C. And he enshrined Asama-no-ohkami there in order to quell the raging spirit of the mountain.

Then, in the year of 806, people moved the shrine to its current location from a place called Yamamiya, which was (and is) about 6.2 km (3 mi.) to the north. Yamamiya still has a shrine called Yamamiya Sengen Shrine, which was the precursor to the current Sengen Taisha. Today, Sengen Taisha still holds a festival every April, commemorating the spiritual relations with its counterpart in Yamamiya.

In former days, the big festivals were held twice a year and they included a ritual called Yamamiya-goshinkou (山宮御神幸). In this ritual, a sacred hoko was carried back and forth between the two shrines on the left shoulder of a Shinto priest. (It had to be held always on the left shoulder.) Hoko (鉾) is an ancient weapon with a blade on the top, but in this case, it is a ceremonial hoko with a long wooden handle. A rock that was used as a hoko stand for the ritual is now displayed in front of the Main Gate of Sengen Taisha.

The shrine’s main structures we see today were built in 1604 by Tokugawa Ieyasu, the ruler of Japan at that time. Ieyasu sponsored the building of twenty-three structures at Sengen Taisha to express his gratitude for winning a decisive battle at Sekigahara in 1600. But unfortunately, the great earthquakes in the 17th and 18th centuries destroyed many of those buildings. Today, only three of them still remainーthe Inner Shrine (Main Hall or Honden), the Front Shrine (Haiden), and the Main Gate (Romon). They are all listed as important cultural assets of the nation.

The Main Gate structure is about 12 meter high, and contains the carved statues of zuishin (guardians) on its right and left sides. They are protecting the shrine. On their backs there are inscriptions saying that they were carved in the 19th year of Keicho, which is 1614 A.D.

With a height of about 13.6 meter, the Inner Shrine has an unusual shape. It is a two-storied building, each with its own roof. The first story has a roof which gently slopes downwards on four sides. It’s said that the roof was designed to resemble the shape of Mount Fuji.

And the top story, with its asymmetrical gabled roof, might represent the celestial world where kami reside. They say that this type of two-storied shrine structure is very rare throughout Japan. And it is called the sengen-zukuri architectural style, which was named after this very shrine.

Sengen Taisha Shrine is very close to Mt. Fuji World Heritage Centre, Shizuoka, which is a museum introducing various aspects of Mt. Fuji. Omiya Yokocho in front of the parking lot of Sengen Taisha is a collection of a couple of small eateries and you can try some of the local dishes there. And the mystical Wakutama Pond, the nation’s Special Natural Monument, is in the precinct of the shrine. If you drive north for about 21 minutes, you will arrive at Shiraito Falls, which is another World Heritage Site in Fujinomiya City.

If you are going to visit Japan and are looking for a private English-speaking tour guide in the Shizuoka area (or at the southern foot of Mount Fuji), please send an e-mail from the Rates/Contact page of this site.