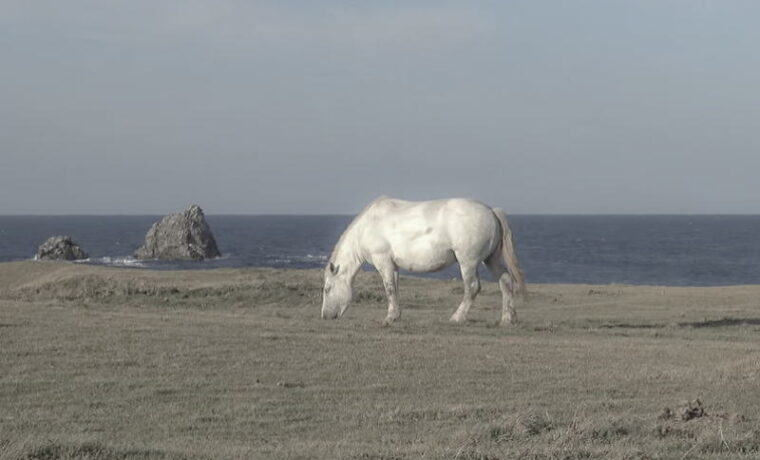 The "Kandachime horses" are unique to Higashidori Village and are now protected as a Prefectural Natural Treasure of Aomori.

Cape Shiriya (Shiriyazaki) is a headland at the northeastern tip of Honshu, Japan’s main island. It forms a boundary between Tsugaru Strait and the Pacific Ocean. Tsugaru Strait is separating Honshu from Hokkaido. In the past, the waters off the cape were feared by sailors and fishermen as being very dangerous. This is a point where the tidal current easily turns. In addition, there are a lot of rocky shallows around here. The dark and foggy seas caused lots of wrecks. That is why this cape used to be called the “Cape of Shipwreck.” On the shore stands a couple of tombstones as well as a small Jizo statue protecting the souls of the deceased.

This area is included within Higashidori Village in Aomori Prefecture. The village is sparsely populated, with its total population of less than 6,000 as of now. Many residents are engaged in commercial fishing. The village’s abalones, sea urchins and seaweed like Japanese konbu kelp are highly prized. The area around Cape Shiriya has a lot of wetlands and is abound in rare species of plants and animals. It became part of Shiokita Hanto Quasi-National Park in 1968.

Higashidori Village is noted for at least two attractions. One is Shiriyazaki Lighthouse. It was the first western-style lighthouse built in the Tohoku Region. This white structure was designed by a Scottish engineer named Richard Henry Brunton (1841-1901) and was completed in 1876. Brunton was one of the first O-yatoi Gaikokujin (foreign advisors hired by the Meiji government). During his stay in Japan, he designed as many as 26 lighthouses across the country, established a school for lighthouse engineers. Today he is called the Father of Japanese lighthouses.

The other noted attraction of Higashidori Vilage is so-called Kandachime horses. They are unique to the village and are now protected as a Prefectural Natural Treasure of Aomori. Since long ago, village people have been using horses for agricultural and other draft work like carrying seaweed to the nearby hamlets. Over time, those horses were crossed with a number of foreign breeds to improve strength and durability. After 1960, in particular, cross-breeding with the Trait Breton, a French breed, was encouraged. Perhaps that is one of the reasons why the present-day Kandachime horses have large bodies and muscular legs.

Currently, there are 25 Kandachime horses in the village. They are basically at pasture all year round, grazing around Cape Shiriya from April to November. During the winter, they spend time in the nearby winter pasture called “Ataka”. This style of keeping horses is uncommon in Japan. On a fine day, a number of horse lovers come to meet them. The horses are friendly and not afraid of humans at all. But please be careful not to surprise them because they could harm you when frightened.

The first time I visited Cape Shiriya, a strong wind was blowing. But it was not very cold. I drove a long distance from the center of Aomori City. Northbound through the Shimokita Peninsula. During the last 20 minutes or so of the driving, I didn’t see many residential houses. And there was little traffic. Sometimes it was as if I was driving through the vast fields of Hokkaido. I was listening to the radio. It was a program hosted by Tatsuro Yamashita. He happened to pick up this tune by Procol Harum, “A Whiter Shade of Pale”. Then, Tsugaru Strait, as blue as eternal, gradually came into view through the bushes on my left. It was unforgettable.

I visited the Ataka pasture in early March 2019. Ataka is the place where Kandachime horses spend the winter season. It is located 3.3 km south of the Shiriyazaki Lighthouse. The horses are moved to this place in late December and stay here until late March. I asked a staff of the village’s administrative office if the horses are taken here directly from the pasture around the lighthouse in late December. “No,” she said. “In the beginning of December they are temporarily moved into a pen located halfway between the lighthouse and Ataka. It is for a medical check-up. Then, they come to Ataka around December 20”.

They say that the direct ancestor of the Kandachime horse is a type called the Tanabu horse. In the Edo Period (1603-1868), Tanabu horses were roaming the pasture throughout the Shimokita Peninsula. As working animals, they were strictly controlled by Morioka Domain (Nanbu Domain) that reigned in this area. They had short but muscular legs, relatively small frames, and strength to endure the severe winter of this region. The Tanabu horse is said to have descended from the Nanbu horse, a type indigenous to Japan. But today the original Nanbu horse is believed to have “disappeared” as a result of a number of cross-breeding with foreign horses.

From the late 19th- to the early 20th century, the horses in the Shimokita Peninsula were further crossed with various other breeds to gain more sturdiness. They were used mainly for agricultural and military purposes. What should be noted is that cross-breeding with the Trait Breton was conducted only for the horses in the Shiriya district. And that gave the “Kandachime horses at Cape Shiriya” a kind of distinction different from any other breed in Japan.

After seeing the horses, I walked across the bushes to the rocky seashore. It was the Pacific Ocean. The water in the pools among the rocks was crystal clear. Looking into the pool, I could see the shells and small fish vividly. Since Higashidori Village is located at the tip of the peninsula, the village’s coastline is roughly divided into two sections: the Pacific coast in the east and Tsugaru Strait coast in the west. And seaweed-gathering has flourished here and there in these coasts since long ago.

Encounter with a Japanese Serow

On the way back to the pasture, I noticed something was looking at me in the bushes. It was a Japanese serow, a kind of Japanese antelopes. They are distributed widely across Japan. But, at one time, the number of them declined greatly due to overhunting. The Japanese government didn’t neglect this situation. They added the mammal to its Natural Monument of Japan list in 1934. And again in 1955, the species was designated as a “Special” Natural Monument of Japan. Since then, the Japanese serow has been protected and their number increased.

Revisited Cape Shiriya to see Kandachime horses. Went up to the top floor of the lighthouse.

I visited Cape Shiriya again in the end of October 2019. It was cloudy and a little bit cold. This time, not many Kandachime horses were seen near the seashore. Most of them were gathered together inside a pen a little far from the lighthouse. They were as friendly as ever.

I heard that almost all the horses at pasture are mares. A stallion is mingled with them during the breeding season only. Today, a local livestock union is controlling the number of Kandachime horses in Higashidori Village. After World War Two, the demand for farm horses decreased as the farm work was gradually mechanized. At one time, the number of the horses was reduced to only nine. But thanks to the efforts by the local stock raisers, the number of them has increased to 25.

The first time I visited Cape Shiriya, it was as if I had lived my life until that day only to visit there, only to see the sight. I am not exaggerating. But it is very difficult to explain. The Kandachime horses are adorable, but they are not the sole reason why I am drawn to this place so strongly. It is something indescribable, but it may have something to do with a sense of “attainment” brought about by actually stepping onto the northern fringes of Japan’s main island. If you visited this place yourself, you would understand what I mean. You go there yourself. That’s the only way I can communicate with you about this place.

Went to see Kandachime again in summer. A crow was eating horseflies on the back of a horse. Then, moved to Sai Village and observed Japanese macaques.