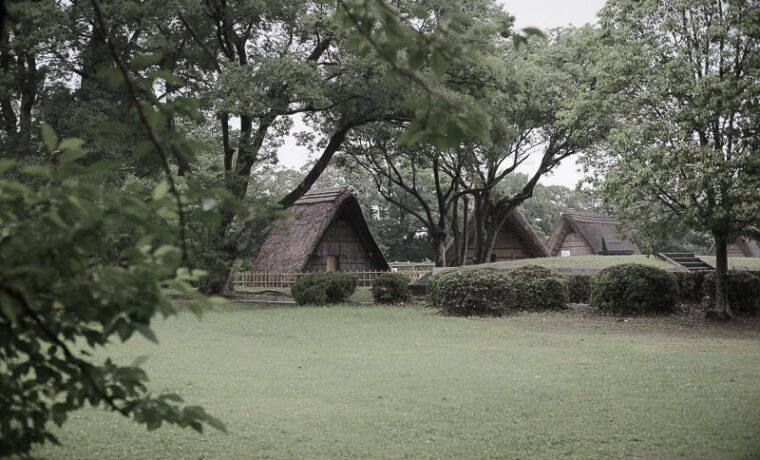 The vegetation in Japan was also beginning to change. Conifer forests, which had occupied most of the land, were, little by little, replaced by deciduous broad-leaf trees.

The Jomon Period in Japan roughly corresponds to the Mesolithic and Neolithic Periods in the world history. After the Last Glacial Maximum, which was the coldest period during the latest Ice Age, around 21,000 years ago, the temperature became gradually warmer globally. The glaciers and ice sheets covering the earth’s surface started melting, and the sea levels became higher. And the Japanese archipelago was once again, and for the last time, separated from the Eurasian Continent around 13,000 years ago, becoming almost identical to what we see today on a map.

By that time, massive mammals, such as mammoths and Naumann’s elephants, had already been extinct, greatly changing the animal distribution on the ground. The vegetation in Japan was also beginning to change. Conifer forests, which had occupied most of the land, were, little by little, replaced by deciduous broad-leaf trees, like oak, beech, chestnut, and walnut. Since these trees bore edible nuts in autumn, people began to collect these nuts, learned to preserve them, and eventually, came to settle in one place for a long time.

They lived in a simple structure called a tateana-jukyo (a pit dwelling house) with a sunken earth floor and wooden pillars. It is generally understood that with these changes in people’s lifestyle, which were originally brought about by the global climatic and environmental change, the Paleolithic Period ended and the Jomon Period began in Japan.

The Bow and Arrow

There were several other characteristics that marked the difference between the Jomon Period and the preceding Paleolithic Period. The emergence of the bow and arrow was one of them. This new hunting gear reflected the change in their hunting targets. With huge, but rather slow, elephants already gone, they had to hunt down more fast and nimble animals in the woods, such as wild boars and deer. Since those animals were difficult for them to hunt with only conventional tools like spears, the bow and arrow was a perfect replacement.

Jomon People continued to use the chipped stone tools. But their tools were more sophisticated and diversified than the Paleolithic ones. The Paleolithic people surely had the technique for polishing a stone partially. But the polished stone tools of the Jomon Period were much more refined works. The Jomon people were also able to make fishing tools, such as hooks and harpoons, out of animal bones or horns. But they had not yet had metal vessel production techniques as well as the full-scale rice cultivation method (like the kind used with large paddies).

In fact, there is no better representation of the period than the group of earthenware with their striking designs, which appeared in the middle of the Jomon Period. Some of the earthenware had elaborate ‘straw-rope’ patterns on the surface, while others had complex ‘flame-like’ decorations on the rim.

There is no doubt that those earthen vessels with noticeable designs are iconic works from the period. Even today, their bold, primitive charm attracts many people, and museums occasionally hold their exhibitions. However, it is not the case that all Jomon vessels are eye-catching like those. Throughout the long Jomon Period spanning well over 10,000 years, people produced a variety of earthenware. And also, there were regional differences. For instance, earthen vessels from the earliest period of Jomon are generally simple and plain ones with no patterns or decorations on the surface. Furthermore, few straw-rope patterned vessels have been discovered in the Kyushu Region, including the islands of Okinawa.

It is not clear whether a earthenware-making technique was originally introduced to Japan from the Asian continent or if it was invented domestically. The oldest fragments of earthenware ever discovered in Japan date back some 16,500 years ago. (Based on this fact, some archeologists argue that the Jomon Period in Japan really starts at around this point.) They were the ones unearthed from the Odai Yamamoto Site in Aomori Prefecture (in the Tohoku Region). Interestingly enough, archaeologists have also discovered pottery fragments from almost the same period in South China (at several sites along the Yangtze River) as well as in Russia (in the areas along the Amur River). But it seems that there are no connections between these findings.

In any case, it is certain that earthenware brought about a big change in people’s lifestyle in the Jomon Period. It enabled people to preserve or cook their food. People came to be able to eat some kind of soup or stew with fish, shellfish, or animals.

Things like acorns and plant roots surely became easier to eat after boiling. Boiling also removed their bitterness (bitter components were sometimes toxic). So, researchers believe that thanks to earthenware, Jomon people could enjoy a far richer dietary life than their Paleolithic counterparts by taking in all of the nutrients from each of their foods.

We can see glimpses of Jomon people’s lives by examining shell mounds. A shell mound (貝塚) is another feature that characterizes the Jomon Period very well. It is a place where ancient people used to dump their daily household waste. True to its name, a large amount of shells have been found there, but animal bones, bone tools, pottery fragments, and in very rare cases, human bones, can also be unearthed in their relatively well-preserved states. This is because, once people dump shells into a pit, the calcium component from them seeps into the ground. And it turns the acidic soil into alkaline soil. That prevents some materials in the same pit from easily decomposing.

Ancient shell mounds are not unique to Japan. People have discovered many shell mounds all over the world. The coastal areas in North China as well as in the Korean Peninsula also have a large number of them. Out of over 25,000 shell mounds discovered in Japan, the Omori shell mound in the Kanto Region is especially famous. This is because that is the first shell mound in the country to have been studied by academics. It was in 1877, and an American zoologist named Edward S. Morse led the excavation. One day, during a train trip between Yokohama and Tokyo, Morse happened to notice an area of land where a bunch of white shells was visible. Later he asked the Japanese government for permission to excavate, and the rest is history.

He published a report a couple of years later. And that report was probably the most significant one among his many accomplishments. In the report he used the term ‘cord marked’ to describe the pieces of pottery he found. The term was eventually translated into Japanese as ‘Jomon’. And it became the name to express the particular type of pottery as well as the whole era during which people used those vessels.

The kanji characters for Jomon (縄文) mean ‘staw-rope pattern’. Today, in honor of Morse’s research, people in Japan sometimes refer to the Omori shell mound as the ‘birthplace of Japanese archaeology’.

Photographs on this page were,
unless otherwise noted,
taken at the Hamamatsu City History Museum and Shijimizuka Park,
by Koji Ikuma, with Fujifilm X-T1 and XF 35mmF2 R WR,
or iPhone 6 Plus, on May 28 and June 26, 2020.
Courtesy of the Hamamatsu City Museum.